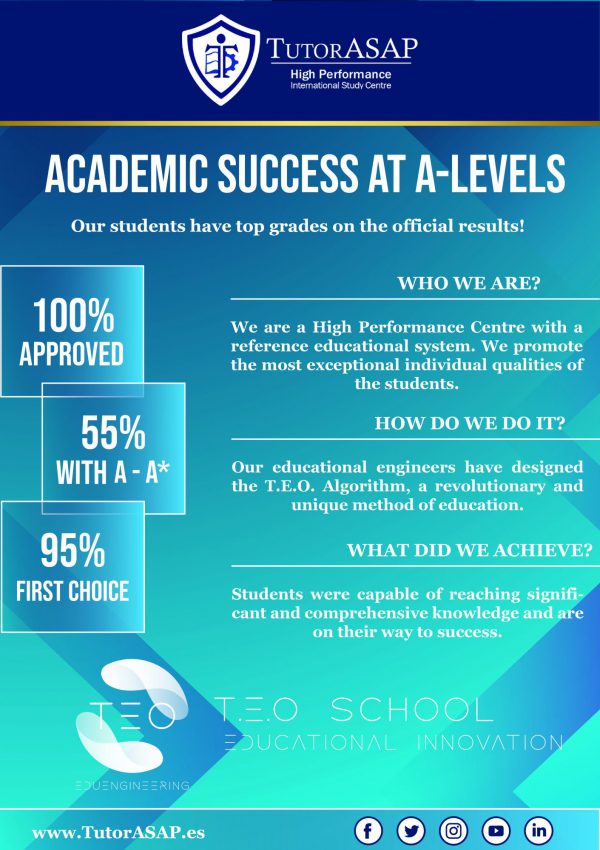 a levels grades in tutorasap

In our case, we’re celebrating. Despite how the situation presented itself, TutorASAP students can boast of grades because 100% passed their A-levels!

The statistics are extraordinary: out of that 100% pass rate, 54% have obtained A’s and A*’s, the maximums to be obtained according to the British system. Moreover, having these grades, 95% have gone to their first choice, that is, they have been accepted and are going to the university they had chosen.

But, how has the A levels grading system been with Covid?

At first it was based on the algorithm of Ofqual, which is the board that regulates exams and qualifications. This algorithm had determined that, due to Covid, a ranking was going to be made for all the exams that consisted of standardising the grades so that the students could get fair results.

The problem has been that many students have failed or had their grades lowered because of these rankings. For example, if there were “X” number of students with the same grades in a subject, having to make a ranking, there have been students who have been disadvantaged, causing discrimination in their grades.

On August 18, the UK Education Minister announced that to avoid such a mismatch, the grades that the schools had set would be maintained, and would not be changed by this algorithm. Thus, the lowering of grades was avoided because they were results that the Tutors and Teachers had given to their students.

Each school had its own criteria for the grades it gave, but the AQA (the British system’s examination license for A-levels and IGCSE) required that the results be supported by clear evidence, and that they be fair. In other words, to see the student’s work and evolution and to be able to grade them in this way. Even so, the overall results have been a disaster. And many students from other centres have been left with low grades and without entering university…

How have we done it at TutorASAP?

At TutorASAP we have evaluated on the basis of exams we have done at the end of the year to check the evolution of the student and see their effort, although we did not want to rely only on a single test (and more with the Covid in between), so we have made a balance with past grades and other works of the academic year.

We have seen that, in spite of all this crisis, we have managed to get our students to make an effort and their learning to develop perfectly until they achieved their goals. We have seen this in their results, which have been magnificent.

For those of you who have not taken your exams with us, don’t wait until next year, we will support you. Do your A-levels with us and we promise you the grades you deserve!

INTERNATIONAL BACCALAUREATE (IB) OR A LEVELS? DIFFERENCES BETWEEN THE INTERNATIONAL SYSTEM AND THE BRITISH SYSTEM